PewDiePie has an estimated net worth of $40 million as of December 2021.

PewDiePie (aka Felix Kjellberg) had around 45 million subscribers in 2016. Five years later,  over 110 million people have subscribed to his YouTube channel.

In just five years, how has he gained more than 65 million subscribers to his YouTube channel?

PewDiePie is one of the biggest YouTube stars with over 111 million subscribers. How can one replicate his success?

How has PewDiePie gone from zero to the most-subscribed individual YouTuber in the world? In this PewDiePie net worth post, let’s discover all the interesting things including;

He is mostly famous for his gaming videos and satirical commentary on his YouTube channel called PewDiePie. PewDiePie is currently the fourth most-subscribed and #1 most-subscribed individual YouTuber with over 111 million subscribers.

See that YouTube milestones? PewDiePie went from 1 million to over 110 million subscribers in just about NINE years!

How did he do that? Let’s find out in this interesting case study on PewDiePie net worth post.

PewDiePie Net Worth: Lessons from #1 YouTuber in the World

The power of consistency

So far, Felix has published 4,458 videos on his YouTube channel.

Felix started his YouTube channel PewDiePie in 2010 and he has been uploading videos consistently ever since then.

Unlike so many other YouTubers, Felix is extremely consistent in his videos.

In fact, Felix uploads a video almost every single day on his channel. It’s a great accomplishment in itself even after getting over 111 million subscribers on YouTube.

Just open his YouTube channel and you’ll be amazed by his video posting consistency.

See that? Felix publishes at least one new video every single day.

Had he stopped posting videos regularly on his channel, he wouldn’t have accomplished half of what he has accomplished now. That’s the power of consistency.

No matter what industry you’re in, if you want to become successful, be consistent. There are no other shortcuts.

Yes, it’s hard to maintain consistency when you’re getting started but that’s what you need to grow bigger in the long run. Set short-term goals that are easier to achieve, gain momentum, and make progress every single day.

You can do it alone

It doesn’t matter whether you’re an individual YouTuber or a team, if you have a clear vision and goal in mind, you’ll become a successful YouTuber.

Many corporate companies including his rivals such as T-Series spend millions of dollars on producing their videos.

In case you’re curious to find out his life journey, do watch the following video which was posted on his own YouTube channel.

Get more views to build a HUGE following

To get more subscribers on YouTube quickly, you need to get more views on your videos. It’s as simple as that.

PewDiePie generates over 1 million views per video on average.

When you’re getting over 1 million views with each video, you’ll automatically see an increase in your subscriber count.

That being said, here are a few quick tips to increase your YouTube views to ultimately get more subscribers in 2022.

Use the right keywords: Keyword research is the key to generating more views on your videos. Use popular keywords in your niche (be it gaming, fitness, or anything).

Use those keywords in the right places including your video title, description, tags, etc to improve your video visibility.

The easiest way to find popular keywords is to use tools like Semrush or if you’re just getting started you can use YouTube’s search box and discover what terms YouTube suggests.

Don’t consider your competition as a threat. Instead, use them to grow your network, build an audience and YouTube channel.

Create interesting titles and thumbnails: Thumbnail is the FIRST thing people see when searching for a YouTube video. So you need to spend extra time crafting appealing thumbnails for your  YouTube videos.

NEVER use one of the frames from the video while creating thumbnails. Always create a custom thumbnail with captivating text and attention-grabbing visuals.

Using powerful titles for your videos helps a lot in YouTube SEO.

If you properly optimize your videos with the right titles, you’ll attract long-lasting traffic from YouTube searches. That’s how successful YouTubers like PewDiePie generate millions of views even after years.

You can use free headline generator tools like Portent, Fat Joe, etc to quickly create amazing titles for your YouTube videos.

Create playlists: If you’re following PewDiePie’s YouTube channel for a while, you’ll notice that he uses a ton of playlists to show his videos.

If you’re planning to upload multiple videos that belong to the same category or theme, create a playlist.

That’s how you can showcase all your relevant videos in one place which increases your video watch time since viewers stay longer watching related videos on your channel.

One great thing about Felix from PewDiePie is that he always listens to his fans and YouTube audience.

Engaging with your community is extremely important if you want to be a successful YouTuber.

PewDiePie channel has loyal supporters who support through YouTube memberships, regular video viewers, and commenters. His networking skills with the audience are the MAJOR reason PewDiePie net worth is over 40 million dollars.

Here are some of the ways he connects with his audience;

Felix always finds different ways to interact and engage with his audience to build a strong rapport. If you want to build a HUGE following on YouTube, know what your audience wants and create exactly what they’re craving for.

How Does PewDiePie Make Money?

When you have a massive 111 million subscribers on YouTube, you’ll have access to a ton of monetization possibilities.

Want to discover how top YouTubers make millions of dollars every year? Read our in-depth post on how much money do top YouTubers earn to find out.

So how does PewDiePie make money with over 111 million YouTube subscribers? Let’s find out.

Let’s talk about them briefly so you’ll understand how he actually makes money.

YouTube advertising earnings: The majority of the YouTubers show ads to receive ad revenue. These ads include display ads, overlay ads, or video advertisements from other brands.

Felix uses a combination of YouTube ads along with sponsorship ads to make money from YouTube advertising.

Selling merchandise: Felix has his own merchandise store with Represent which is a third-party eCommerce platform where he mostly sells T-shirts, hoodies, etc.

As you can see above, he sells most of his merchandise at rates starting from $30 to $50 and more where one can actually make solid profits.

Selling your own merchandise has a ton of benefits including

Felix from PewDiePie promotes various affiliate products such as his gaming chair, keyboard, VPNs like NordVPN, and more to earn a commission on every successful sale.

With such a huge following on YouTube platform, Felix from PewDiePie can easily make several thousand dollars every single month from affiliate marketing alone.

He is currently offering the following three tiers which are all available as monthly fees.

When you join his membership on YouTube, you’ll get exclusive access to loyalty badges, custom emojis, live streams, members-only community posts, and so on.

If you’re also running a YouTube channel or planning to start one, you’ll have plenty of monetization opportunities to make more money once you’ve enough following.

Are you looking for motivational quotes from PewDiePie (aka Felix Arvid Ulf Kjellberg)? Here’s a handpicked list of the top 10 PewDiePie quotes.

2. “Every second you’re closer to oblivion. No quote in the world is gonna change that.”

3. “When I started my YouTube channel in 2010, I never imagined that one day it would be the most subscribed channel in the world and that I would be a part of such a great community.”

4. “We’re all different but we’re all the same. You just be and you don’t let anyone tell you who you are. You don’t need labels to make yourself feel valuable, you’re better than that.”

6. “I’m just so very lucky to be able to do what I do for a living, and giving back is a way for me to express my gratitude. I’m so lucky to be in a position to help people, and that’s appealing to me.”

7. “I just want to entertain; that is my main objective and what comes before everything else.”

8. “I took a job at the hotdog stand, I was the happiest I was at that time because I was finally for the first time in many many years doing what I wanted to do, the fact that I could make videos was so much more important to me that I had to spend a few hours a day doing a job that wasn’t that prestigious.”

9. “It was so much easier to connect with my fans when I was smaller. I could answer every message, and I enjoyed that.”

10. “I don’t really care for numbers that much, what I care more about is the support that I get from all you guys. That means so much more than just a random number.”

Here are some of the frequently asked questions about PewDiePie and his YouTube channel.

What is PewDiePie’s real name?

Felix Arvid Ulf Kjellberg is the real name of PewDiePie.

PewDiePie is a Swedish YouTuber and he’s currently the #1 YouTuber with over 110 million subscribers on YouTuber. He became popular by uploading “Let’s Play” videos on YouTube, where he records himself playing games like Minecraft.

How old is PewDiePie?

What is PewDiePie net worth?

PewDiePie net worth is approximately over 40 million dollars as of 2022.

Does PewDiePie have a wife?

How many subscribers does PewDiePie have?

PewDiePie currently has over 110 million YouTube subscribers and PewDiePie is also the NUMBER ONE most subscribed individual creator on YouTube.

Final thoughts on PewDiePie Net Worth

It’s extremely rare to see an individual YouTuber with a whopping 110 million subscribers and PewDiePie did it as he’s the #1 most subscribed independent YouTuber.

Hard work, consistency, and passion – these are the three major reasons behind PewDiePie’s massive YouTube success.

Do you follow PewDiePie’s channel on YouTube? If yes, what’s your favorite video from his channel? Let us know your thoughts in the comments. Please share if you find this case study useful. 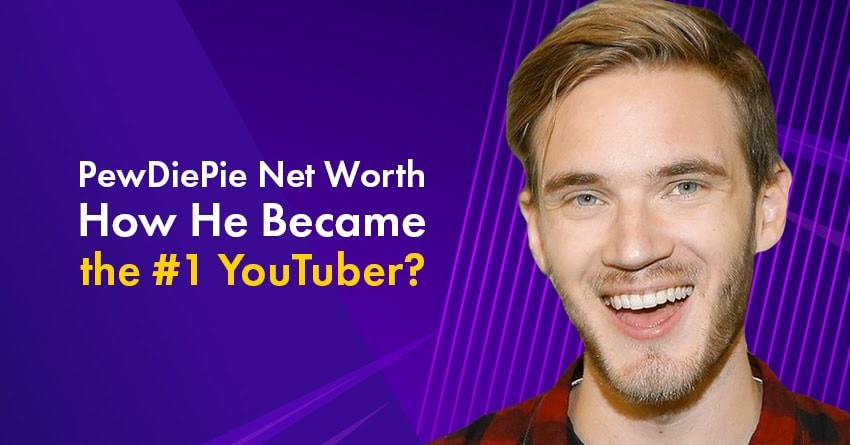 16 Best Pay Per Call Networks + [Get Paid For Every Call]

The Ultimate MaxBounty Review for Affiliates